A Forum devoted to the Practice of Music Notation

RMK wrote:You can use different algorithms in the same file via the note spacing plug-in:

Great! I had never installed that one I guess. Something else to mess around with tonight.

I tried to see what would happen if I fed the Sibelius allotment settings into Finale. There are clearly some other factors at play here too, as I had expected these to be a little closer than they actually are. The bar with the 4 quarter notes obviously receives a lot more room in Sibelius. Since the ratio of quarter to half is the one that is 1.7, maybe Finale is scaling it or something. I had thought if I was using the allotment library these values would be absolute but there are other factors involved I guess. 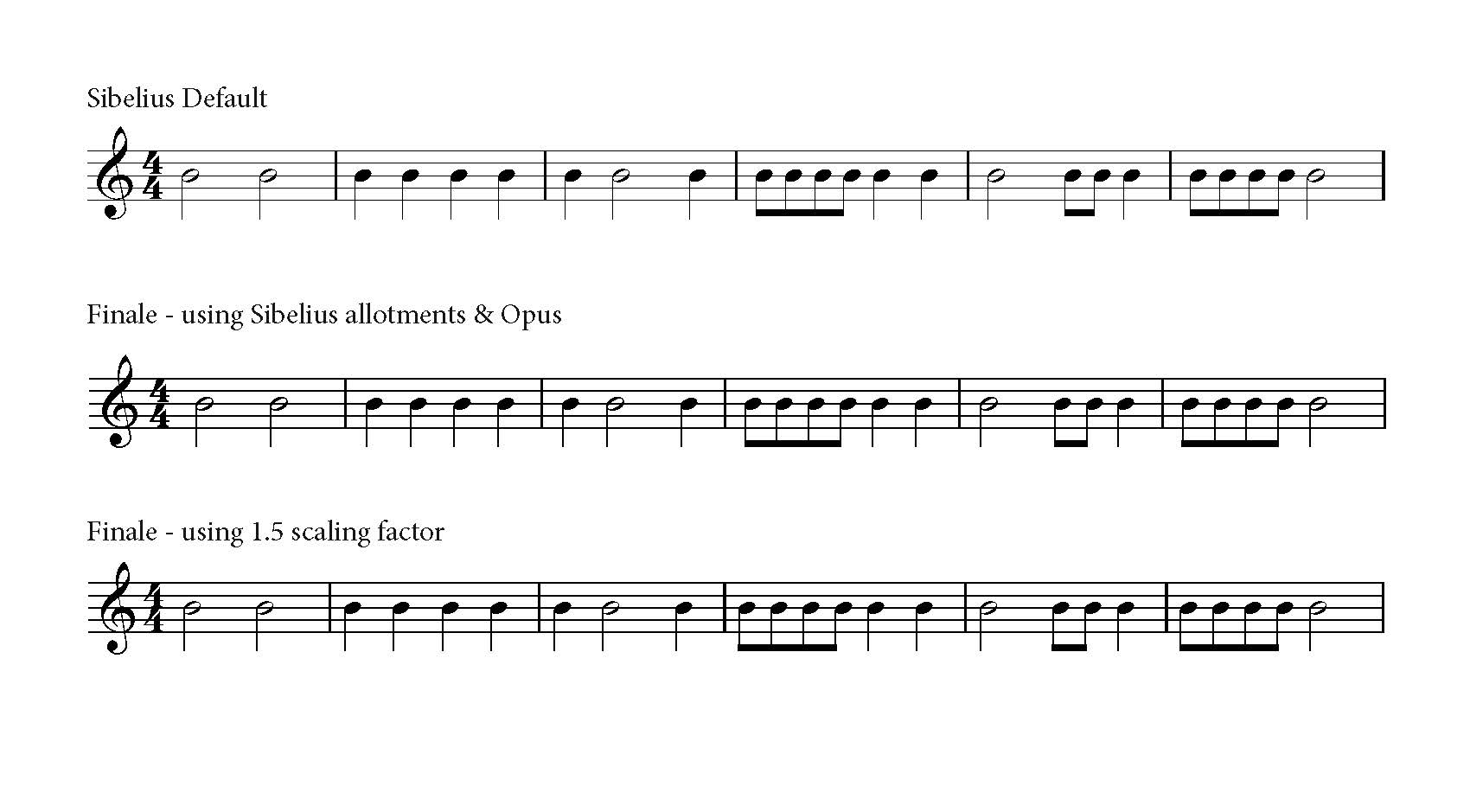 Just out of curiosity, is anyone that expressed a preference for the more "humanistic" spacing using Finale with an allotment library where you purposely altered the spacing to not be proportional?

RMK wrote:You can use different algorithms in the same file via the note spacing plug-in: 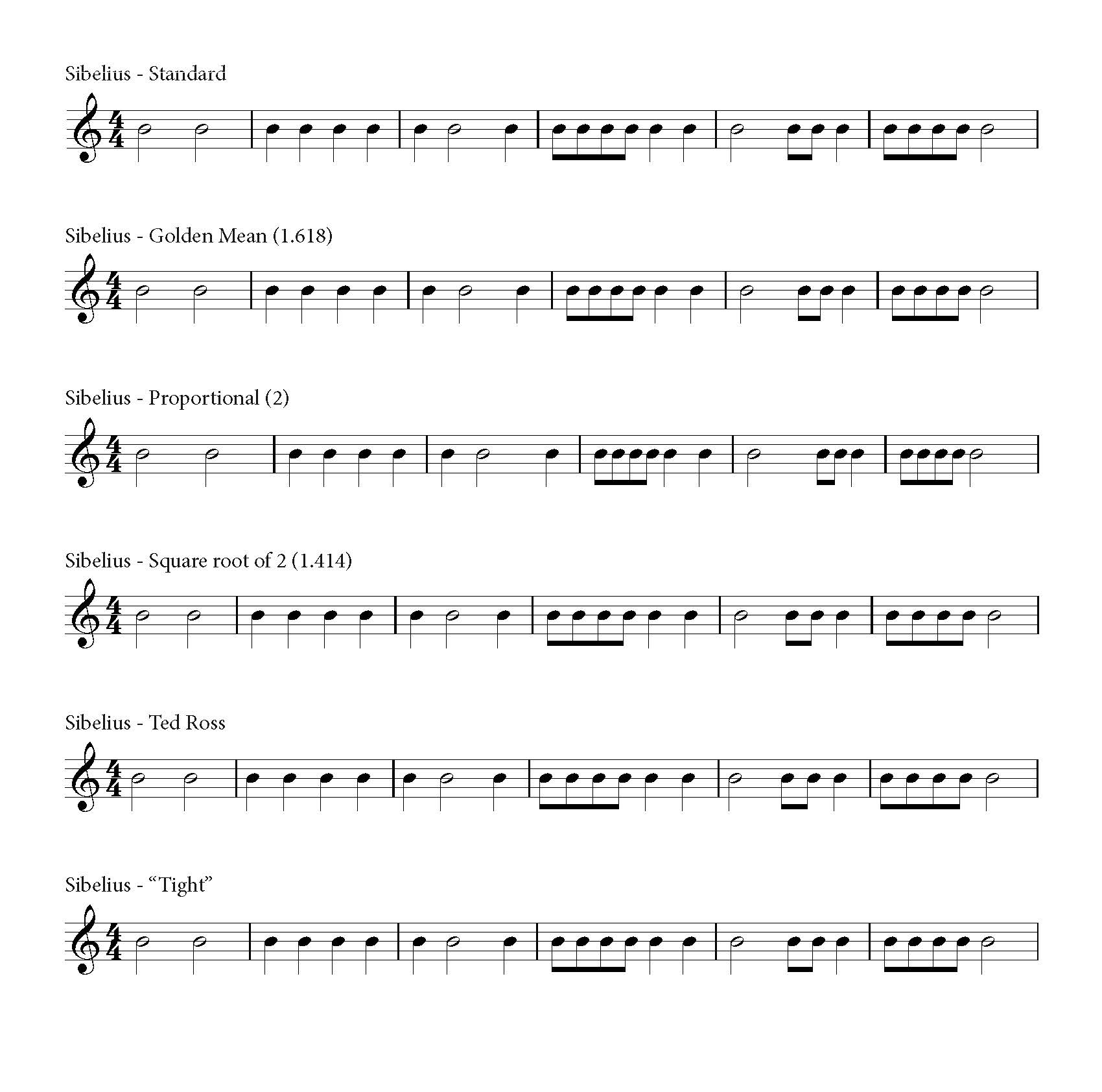 The problem(though not insurmountable) that arises from mixing algorithms is that you'll lose them in the extracted (or linked) parts as they will always set to the default (current setting) for the whole part. The work can be re-done part-by part though.

I sometimes use the allotment libraries to shorten whole and dotted whole notes, especially if the spacing is greater than q = 6 spaces. This prevents long note bars being too long, and the default bar rest length is set to the same as the whole note, so it helps keep them shorter.
Finale 2008/9/10/11/12/14, Sibelius 6/7.5, In Design CC 2015, Illustrator CS4
Top

Here are a couple of interesting scans from books I have on the subject. The first is from William Gamble, "Music Engraving and Printing," 1923, pg 131: 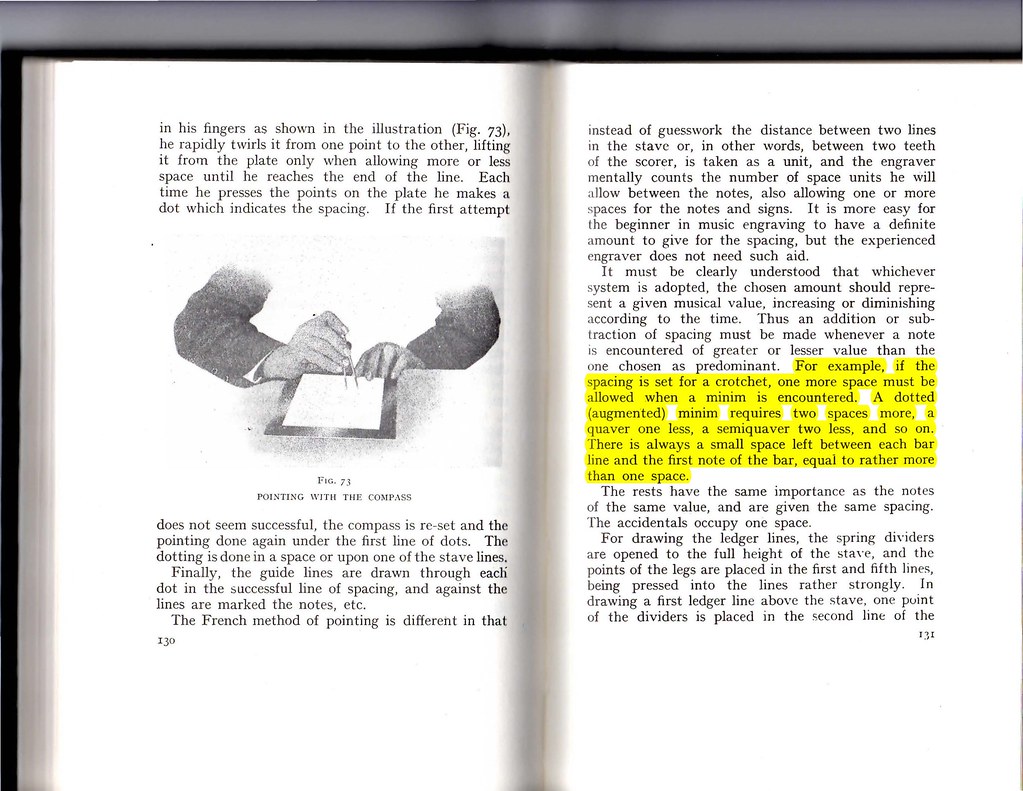 He avoids going into an exact method stating "It is more easy for the beginner in music engraving to have a definite amount to give for the spacing, but the experienced engraver does not need such aid." To me this seems like he is going by eye and not really thinking in terms of a mathematical ratio. When he does give mathematical spacing advice, it is just along the lines of "if the spacing is set for a crotchet, one more space must be allowed when a minim is encountered." Quite frankly, I don't find this terribly helpful since we don't know the amount of space he's allotted for the crochet. Is he really saying regardless of how many spaces a quarter is allotted, a half is always one space more? I find that pretty hard to believe, but instead is conveying the point that obviously a half needs to be allotted more space than a quarter, but probably not twice as much, or he would have likely said so. 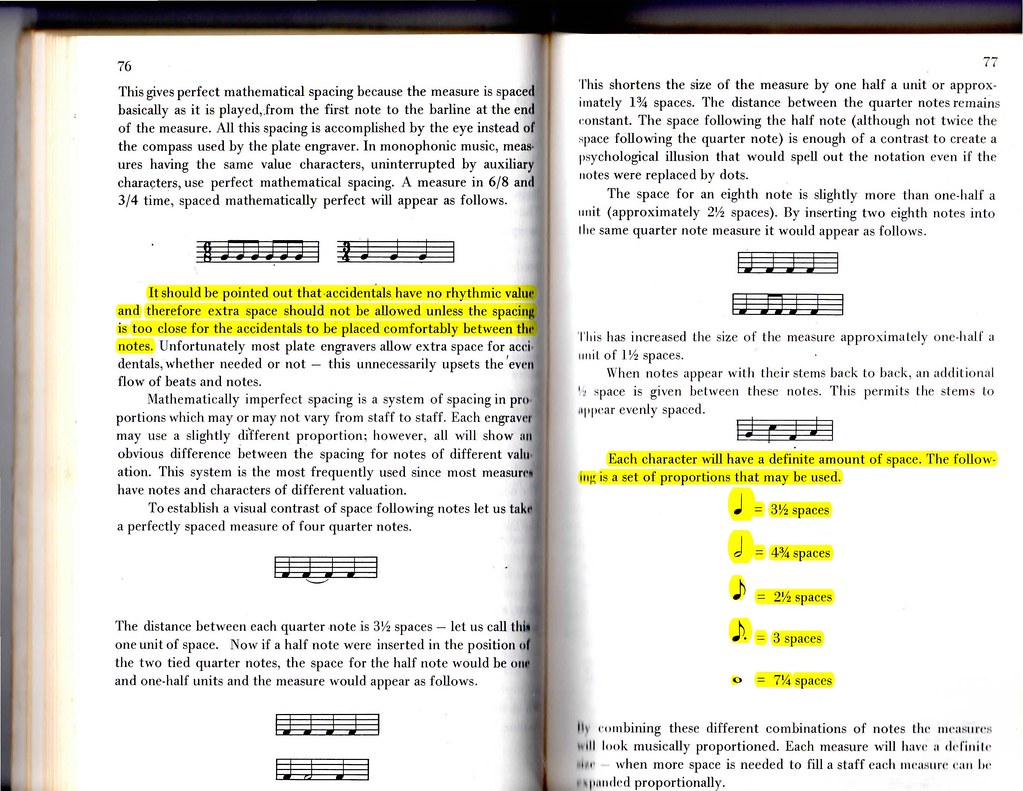 In contrast to Gamble, he actually dictates an exact formula. If we examine the ratios, eighth to quarter is 1.4, quarter to half is 1.36, and half to whole is 1.53. I'm assuming these must be close to what Sibelius is using in the "Ted Ross" spacing algorithm. Looking at the "Sibelius - Ted Ross" example I posted above, to me it seems like the half doesn't get enough space compared to the quarters and eighths. If they are using these spacing values, that seems to make sense as the quarter to half ratio is only 1.36. There is a lot of personal preference here, but remember 1:1 means all notes get the same spacing, so anything sub-1.4 seems like the note values aren't being represented as clearly as they could to my eye.
Last edited by Fred G. Unn on 20 Oct 2015, 17:04, edited 1 time in total.
Top

Return to “Notation Rules and Standards”